Around this time last year, before many countries went into their first COVID-19 related lockdown, Make Medicines Affordable met with activists from Ukraine who are fighting for gender equality and equal access to optimal HIV treatment.

We didn’t know then that their commitment to fulfilling human rights was going to be drawn on even more over the next 12 months, to ensure people have the care and support and access to essential services that they need.

The pandemic has highlighted the inequalities inherent in the patent system, and exacerbated social inequalities, where the more powerful and more privileged are typically less at risk and have access to treatment and vaccines faster.

The challenges posed, and the strength and innovation required to deal with these, also demonstrates what can be achieved when people come together as a community.

Here are just a handful of the brilliant women, who are role models and activists, from the Make Medicines Affordable community – from Thailand, Ukraine, Kyrgyzstan and Kazakstan. They share their own personal experiences and how they are supporting others living with HIV, Hepatitis C, and/or TB.

I WANTED TO HELP OTHER CHILDREN LIKE MY DAUGHTER:  Lyudmila is executive director of a community-based organization, Equal to Equal, and the coordinator of the ‘Teenergizer’ movement in Kazakhstan. “It is important to communicate HIV information to the younger generation. My child has HIV and I wanted to help others. When my daughter was 8 years old, I thought about how to give her the necessary information, and I got to know a community of parents with HIV positive children.”   © Didar Kushamanov/Majority World/Make Medicines Affordable/2021 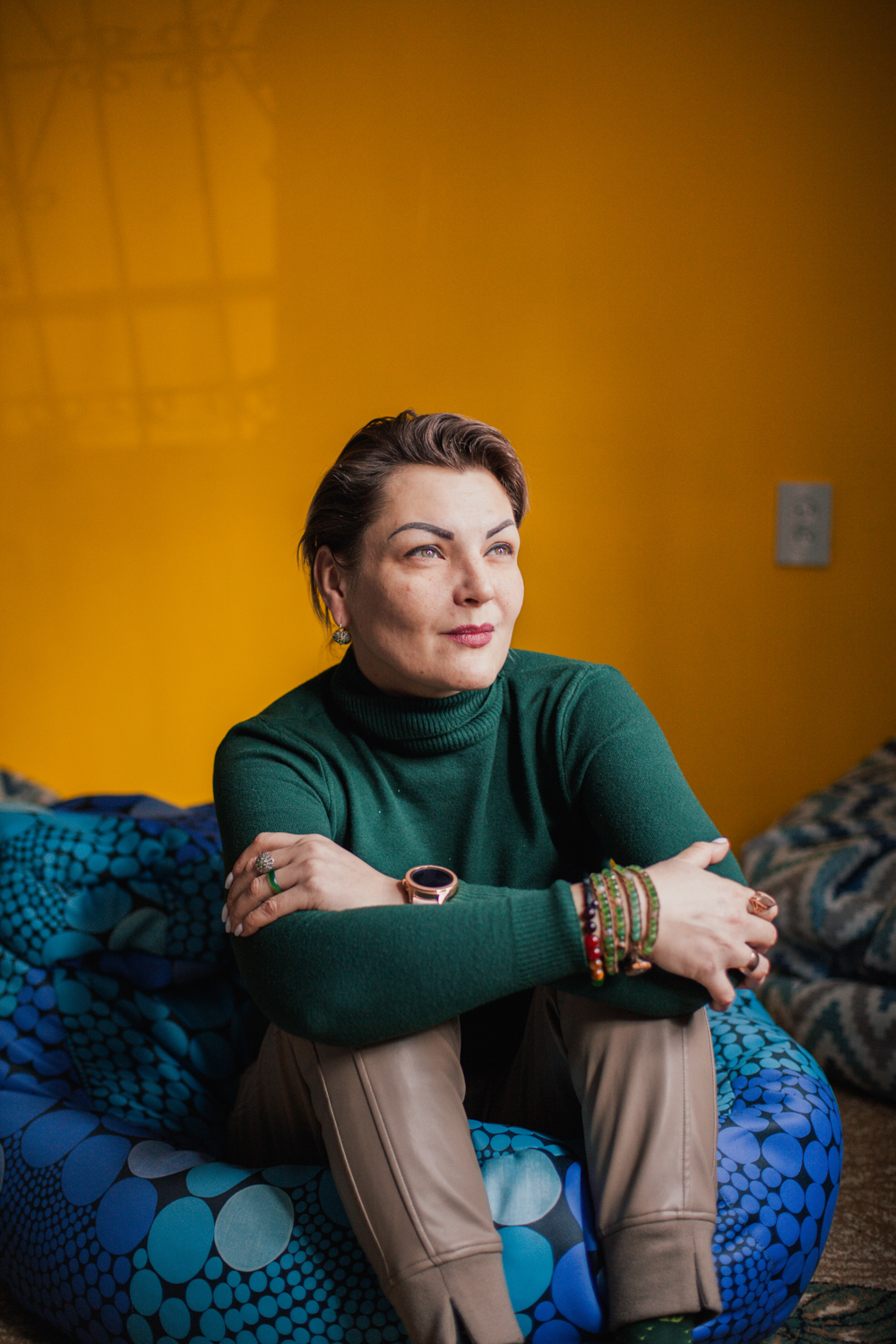 SECOND DATE: Lyudmila and her daughter tested positive for HIV in 2008. “The tests were done because she was constantly ill at the time. The news shocked me. I was scared for myself and for my daughter. For five years it was hard for me to accept my status. Then it became easier. I told my future husband about my status on our second date. We got married five years ago,”  Lyudmila.   © Didar Kushamanov/Majority World/Make Medicines Affordable/2021 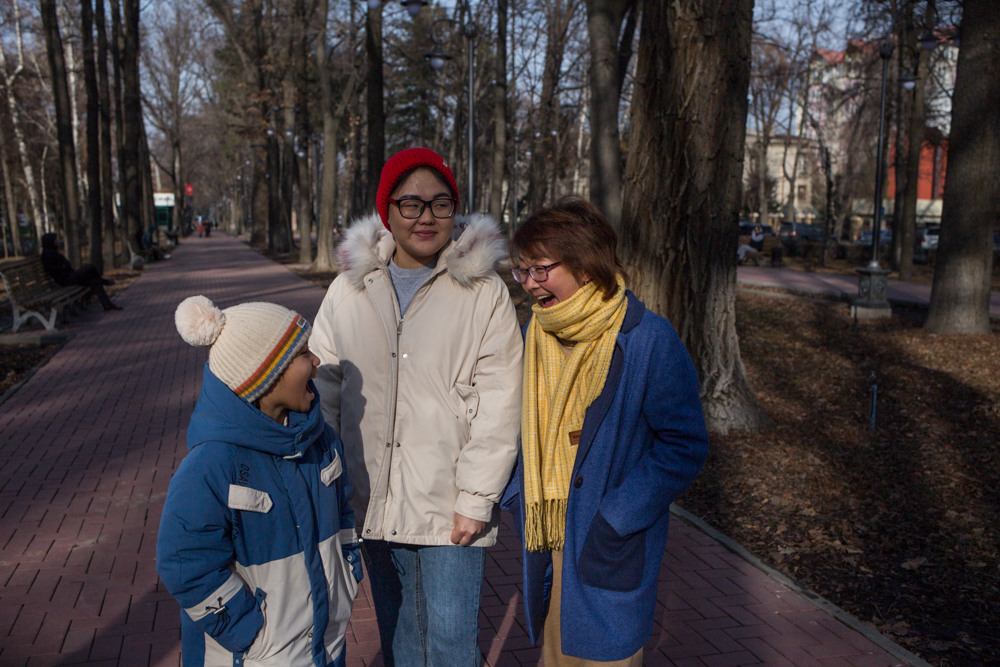 I WON’T GIVE UP: Baktygul (right) was diagnosed with HIV over 10 years ago when she was pregnant. “My first thought was – that’s it, life is over. I felt fear and pity that I wouldn’t get the chance to enjoy a happy parenthood, I wouldn’t have the time to see my daughter grow. I already had an older daughter from my first marriage, she was 9-10 years old at the time. One day she ran in to ask me something about school, and I realized that I had no right to give up and that I must live for her and the child I was carrying.” Bishkek, Kyrgyzstan.   © Svetlana Zelenskaya/Majority World/Make Medicines Affordable/2021

THEIR TEARS WERE MY TEARS: Now Baktygul is an expert on HIV-related issues and runs an organization which focuses on helping women with HIV in far regions of Kyrgyzstan. “My knowledge and my experience are very helpful in this situation, because three years ago these women were afraid of their shadows. I remember how they cried, maybe just like I did years ago.” Bishkek, Kyrgyzstan.   © Svetlana Zelenskaya/Majority World/Make Medicines Affordable/2021

WE MUST AVOID TREATMENT GAPS: In Kyrgyzstan HIV treatment is currently funded by the Global Fund, but this is being phased out. Baktygul and other experts are advocating for the government to procure medicines before the end of the transition period and donor funding. Bishkek, Kyrgyzstan.   © Svetlana Zelenskaya/Majority World/Make Medicines Affordable/2021

RISKING HER LIFE TO SAVE OTHERS: Valeria crossed the frontline in the Russian-occupied Donbas area of Ukraine, in order to get HIV treatment to people in prisons. “I don’t have many old pictures to show you,” says Valeria. “We had to leave our home, and everything in it. It’s all still there, but we can’t go back – my children can never return.” Valeria is Head of 100% LIFE’s Regional Department and continues to support the work in Donbas in this role.   © Gemma Taylor/Make Medicines Affordable/2020 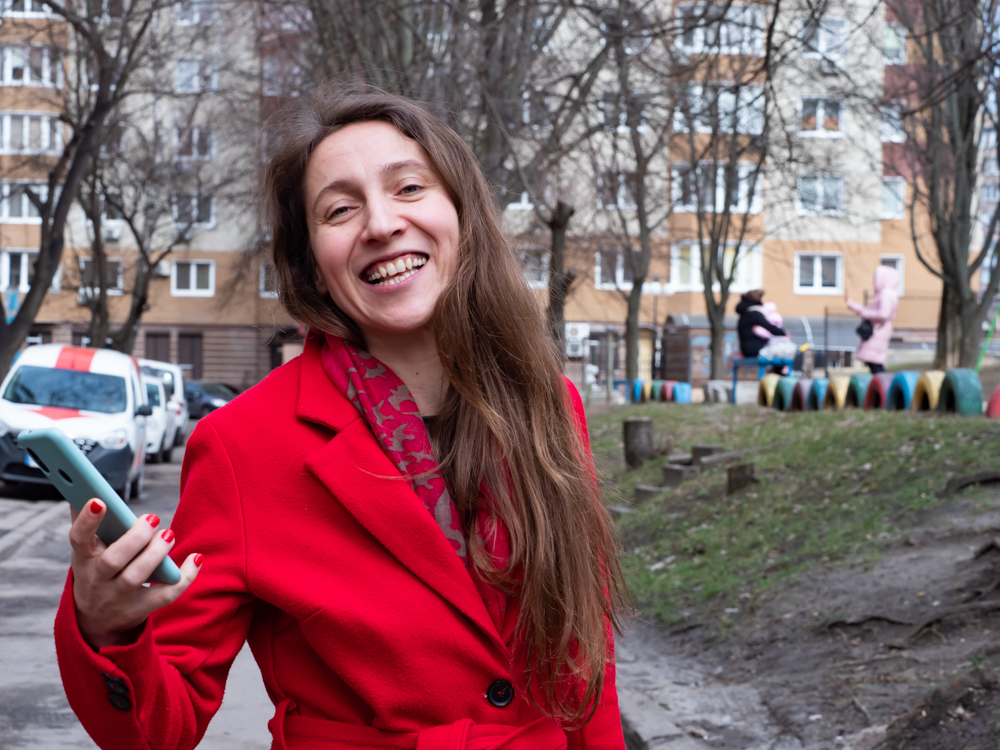 THREE TIMES AS MANY PEOPLE COULD BE TREATED: Valeria is passionate about ensuring access to treatment. “It is thanks to treatment that I can be safe and live the life I have. But when I think about the price of this bottle, $61 for a month, it makes me crazy because the generic one costs just $19 in other countries, which means the HIV budget could go three times as far… Companies extend their monopoly, by evergreening patents, long after patents should have expired. They protect small changes, for example, how many times a day it needs taking, or producing a liquid version – but it’s still the same drug, it’s not new,” Valeria, Kyiv.   © Gemma Taylor/Make Medicines Affordable/2020

OPTIMAL TREATMENT CAN REDUCE STIGMA: “I was told I’d have to wait for 10 more people to die before I could get treatment.” Kularb found out she was living with HIV at the same time that she was expecting her baby. “My husband’s parents were so afraid of becoming infected that they tried to force me out of their house.” As a treatment activist she believes that the goal must be for the BEST treatment. “You achieve three things if you have optimal treatment – better quality life for people living with HIV, you reduce new infections, and you reduce stigma.”   © Gemma Taylor/Make Medicines Affordable/2018

ACCEPTANCE AND AVOIDANCE: “I learned about my HIV status in prison in 2012. My main worry was about how my adult daughter would react to the news. For a month and a half I was preparing to tell her about it. She accepted me,” Kristina, Almaty, Kazakstan.    © Didar Kushamanov/Majority World/Make Medicines Affordable/2021

JUST MARRIED! “Now I am a social worker. I work in the public fund ‘Revansh’. Before that, I worked as a volunteer. I needed to help people. I recently got married, and I work with my husband,” Kristina, Almaty, Kazakstan.    © Didar Kushamanov/Make Medicines Affordable/Majority World/2021 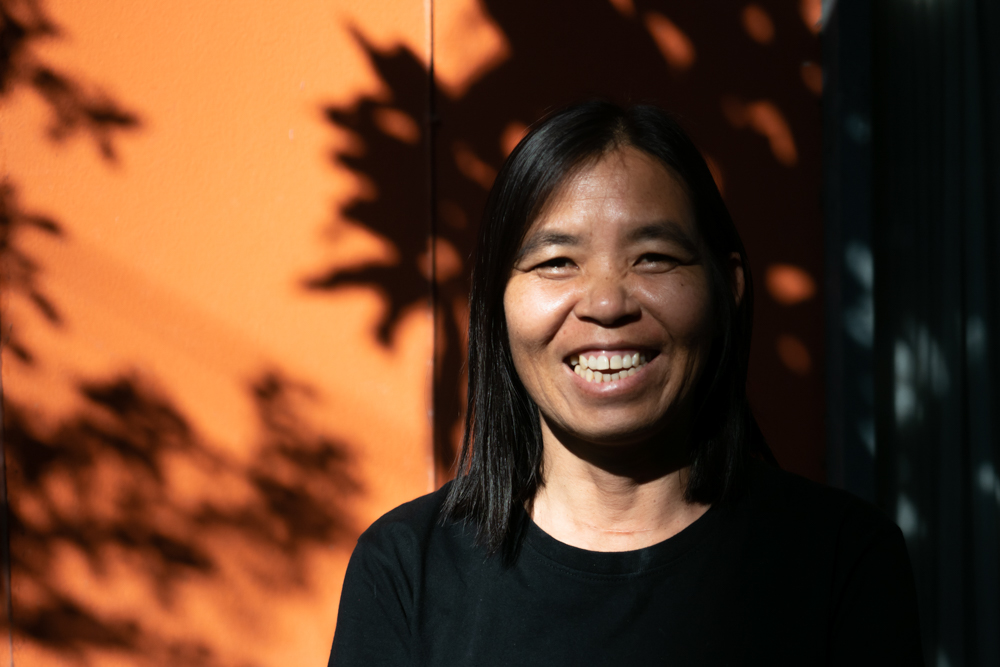 STOP TELLING WOMEN WHAT IS BEST FOR THEM: Yupa, is a regional coordinator with the Thai Network of People Living with HIV (TNP+). She is advocating for women to have more choices and control over their own sexual and reproductive health and HIV treatment. “A woman’s HIV treatment must be her own business,” says Yupa. “Too often other people are deciding what they think is best for women, without knowing an individual’s situation or needs.”   © Gemma Taylor/Make Medicines Affordable/2018

BE BY SOMEONE’S SIDE: “It is important for people to have support when they take a HIV test, because in case of a positive diagnosis it would be hard to face the fact alone. Acceptance doesn’t happen in the first 20 minutes, it doesn’t happen in the first 2-3 days and not in 2-3 weeks, believe me. It comes much later, from the moment of detection to the moment of acceptance you will have to survive and it is important to have someone by your side,” Sabina, Bishkek, Kyrgyzstan.     © Svetlana Zelenskaya/Majority World/Make Medicines Affordable/2021 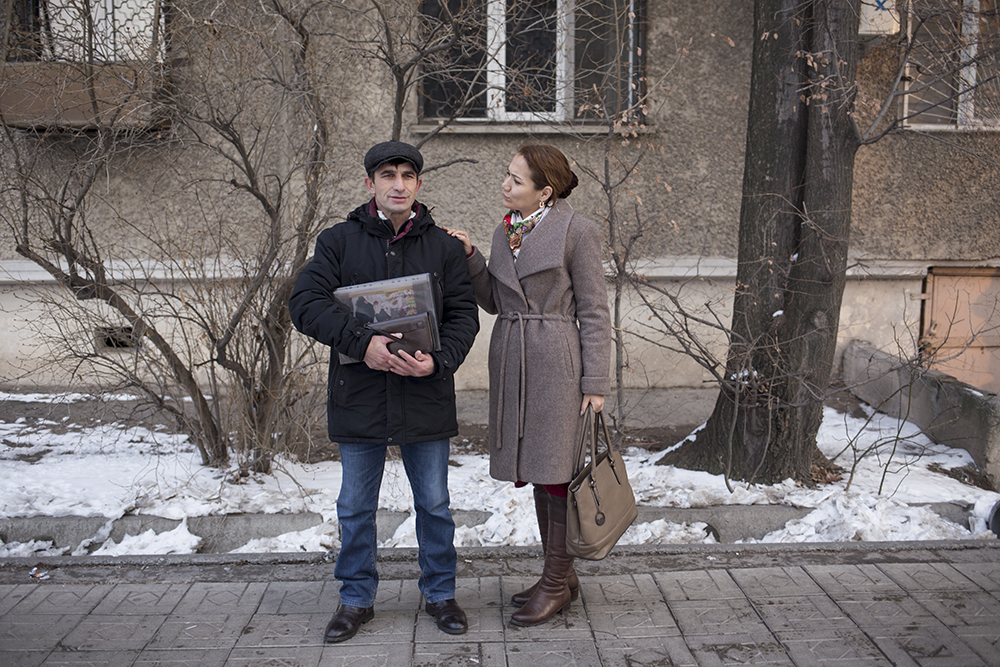 ESSENTIAL SUPPORT: Sabina describes being suicidal after she learned her status, but the support she received from loved ones got her through to a better time. “I was, and still am, supported by my current spouse, who I married after I told him my status, and of course I was supported by my mother and my older sister”. Bishkek, Kyrgyzstan.  © Svetlana Zelenskaya/Majority World/Make Medicines Affordable/2021

DEMAND THE BEST: Noi, who first turned to the Thai Network of People Living with HIV (TNP+) for support, is now a regional coordinator and role model, supporting others. Based in the Isan region, she is collecting primary research – people’s  individual, anecdotal concerns about sub-standard HIV treatment – and turning this into quantifiable evidence to  “create demand and then demand the best!”.   © Gemma Taylor/Make Medicines Affordable/2018

BUSINESS BEFORE BABIES: Noi’s first husband and two infant sons died from HIV-related illnesses. When asked if she thinks pharma execs would still overprice drugs if they could walk in her shoes, she replies: “Oh, they know… they know the damage, but they put business first. They detach from reality while mothers detach themselves from their children.”   © Gemma Taylor/Make Medicines Affordable/2018

WHO CAN TAKE 6 MONTHS OUT OF THEIR LIFE? Krystyna is a communications officer with 100% LIFE, Ukraine. As an ex travel journalist, she was used to being away from home. However, after she was diagnosed with TB, she was told at one point that she would have to be hospitalised for 6 months. “I had to work, pay my rent, look after my daughter, how could I?”. She says that compared to many others, she feels she was lucky, but even with all the support from family and friends, navigating Ukraine’s health system and recovering from TB was steeped with challenges. More optimal TB treatment removes many of the challenges and side-effects associated with older drugs.   © Gemma Taylor/Make Medicines Affordable/2020

WE DO IT FOR THE WOMEN WHO CAN’T YET: Vera is a board member of Positive Women and an activist with 100% LIFE, the largest patient-led organization in Ukraine, and her own experiences led her to establish Kyianka+, a support group for other women living with HIV. “The support I received helped me reduce my self-stigma. Without that I wouldn’t be on treatment now… It is important as activists to be ‘open-faced’. We do this for the women who can’t, who it is much harder for. It is our role as activists to say ‘I live with HIV, I’m healthy and I know my rights’.” Kyiv, Ukraine.   © Gemma Taylor/Make Medicines Affordable/2020 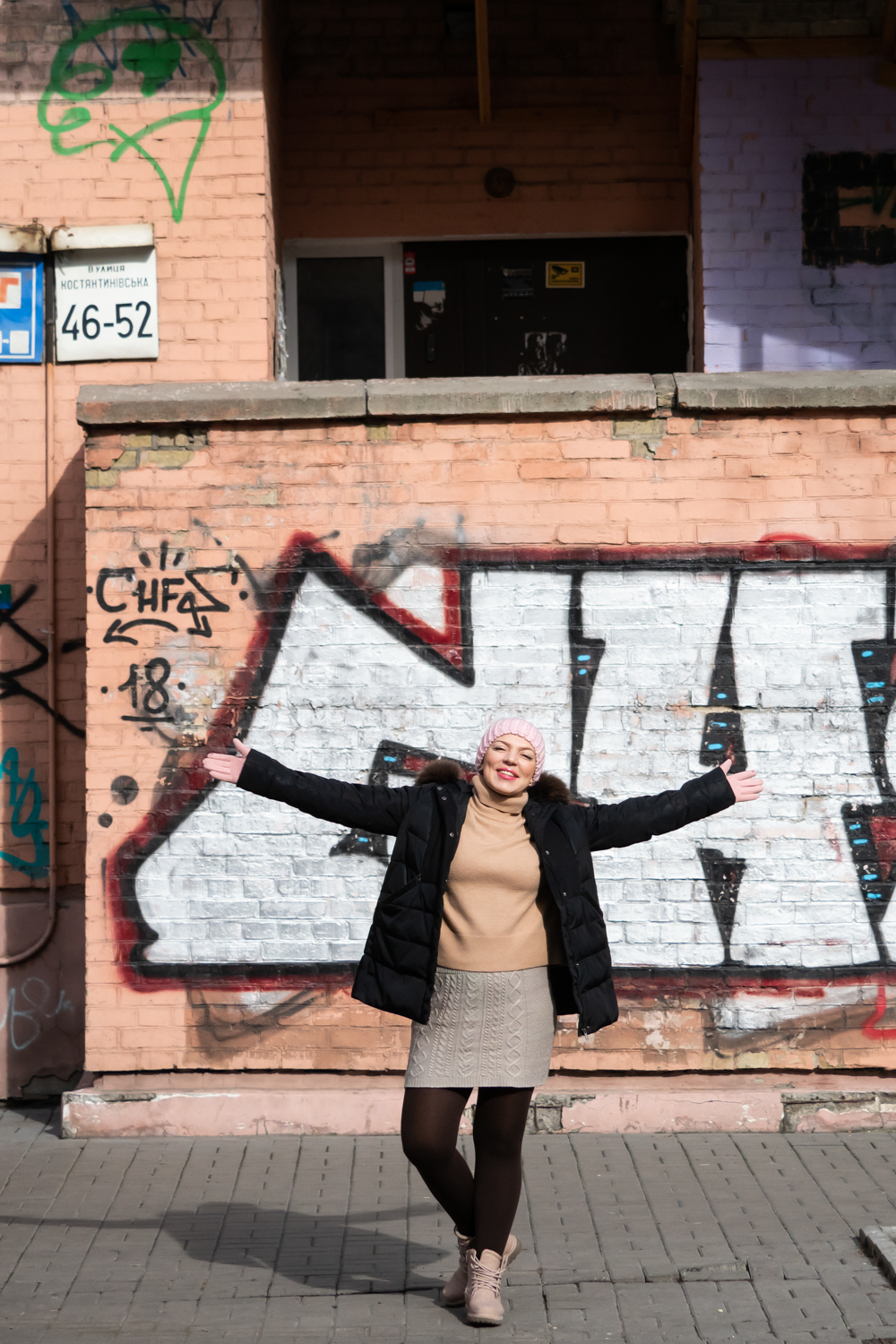 WRAP HER IN LOVE: “When a woman is diagnosed with HIV the first essential thing she needs is acceptance. You must wrap her in love, support and care – like a baby,” Vera, Kyiv, Ukraine.   © Gemma Taylor/Make Medicines Affordable/2020

THEY LEFT ME UPSET, IN A HOSPITAL CORRIDOR: “I was first diagnosed with TB in 2008. People had a fear of getting infected. Everybody turned their backs on me. A relapse happened a year later.  By this time, I was pregnant. The doctors told me that they would not be able to treat me unless I had an abortion. After I had the abortion, they put me in the corridor,” Venera, Almaty, Kazakhstan.   © Didar Kushamanov/Majority World/Make Medicines Affordable/2021

YOU CAN’T DEPRIVE ME OF MY PARENTAL RIGHTS: “Six months after my recovery, a nurse from the hospital came see me where I live and began to ask the neighbors: ‘Where does Venera live, the one with TB? … This information reached the school and a teacher called me. She said that she had been given my son’s documents and told to hand them over to the akimat (local government) in order to deprive me of my parental rights – because I have TB. Thankfully the akimat said they would not do that, but it really was very difficult for me during that period.” Venera, Almaty, Kazakhstan.   © Didar Kushamanov/Majority World/Make Medicines Affordable/2021

REMOVE THE STIGMA AND FEAR, AND LIFE BECOMES EASIER: “I am cured of TB and I have been taking HIV treatment regularly since 2012. At first, I was very afraid to communicate with people. I was helped through visits to the AIDS center. Now I work for a NGO with TB patients. I like helping people, informing them. Many are unaware of their rights. When a person is not afraid, when they know their rights, life becomes easier for them,” Venera, Almaty, Kazakhstan.   © Didar Kushamanov/Majority World/Make Medicines Affordable/2021