“Our charitable organization, 100% LIFE, has been fighting corruption in Ukraine for 20 years,” says Dima.

“We have removed around eight corrupt ministers from their position, and so we have an army against us. Fighting corruption means being accused of corruption – it’s all they’ve got to try and deflect from their actions – to try and keep their ‘good thing’ going. Criminal charges have been brought against the organization about 20 times and there’s been six court hearings. We win every time as we have nothing to hide.”

“Our actions have changed the patent law in Ukraine, for the better. Of course, those who were financially benefiting from dodgy deals and unmerited patent protections don’t see it that way.”

The advocacy work of 100% LIFE has helped reduce the price of key HIV drugs by between and 9% and 20% per drug, and saved 359 million (UAH) on HIV procurement alone, in a single year (approximately $13 million USD).

These price reductions mean more people can access treatment, The number of people on dolutegravir-based combinations, for example, has risen ten-fold, as a result of more affordable pricing. 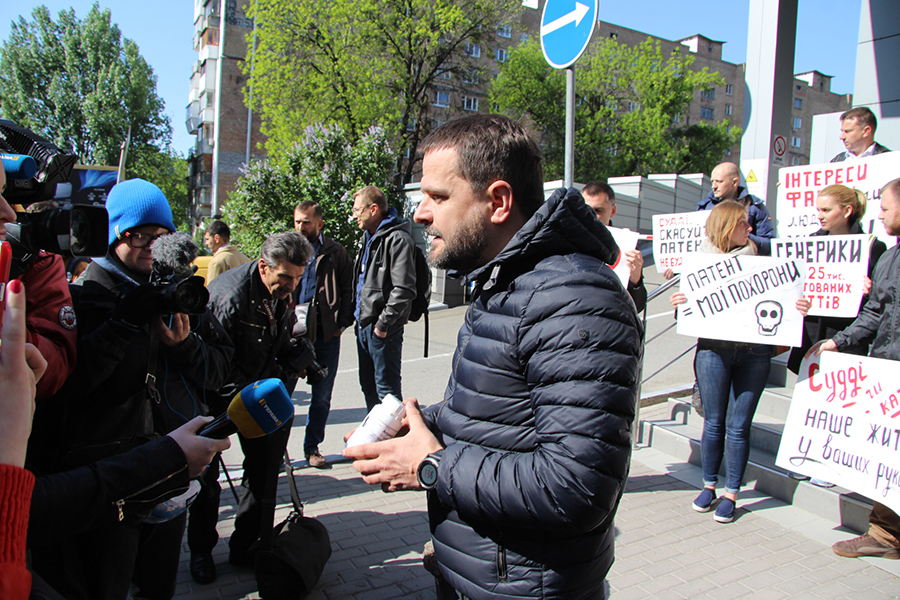 Dima talks to journalists during a protest outside a court in Kyiv. “We are not just fighting not just taboos, but also corruption, in Ukraine. We constantly get legally challenged – and we always win. We have nothing to hide, but when you fight corruption, the big players don’t like it, they try to turn the tables and attention onto us, because when we’re wining in the fight for justice, we’re taking money away from them.” Dima. © 100% LIFE

With an average of 13,000 new infections each year there is a need to build on that momentum, which requires a dual approach – of reducing HIV-related stigma, so more people feel comfortable to request testing and treatment, which would help narrow the gap – and secondly, to guarantee access to affordable, optimal treatment for everyone who needs it.

100% LIFE’s projects contribute significantly to testing and treatment. 100% LIFE provided more than 950,000 rapid HIV tests in 2019, and around 40% of people registered for HIV treatment receive medicines procured by the organization, via its Global Fund project (43,600 people).

The work is literally life-saving. It also makes a dent in pharmaceutical profits. “This is why they would like to shut our moths, to stop us making noise, but we are stubborn and will never give up. The extent to which certain politicians are concerned by us, is a sign of our success, and also of what is at stake for them.”

“Civil society is also making progress on reforming the health care system, which also currently allows for a small number to make excess profits at the expense of patients. The logic is simple for those who are corrupt, which is that if we, 100% LIFE, disappear, everything can be restored, and their illegitimate profiteering can continue with impunity.”

100% LIFE is the largest patient-led HIV organization in Ukraine. Dima is living with HIV, he used drugs for 10 years and was “brought up in prison”. However, it is not his own experiences that led him to be an activist, but hearing a baby in distress in a hospital 18 years ago, back in 2003.

“I was visiting someone at the hospital when I heard a baby crying in a neighbouring room,” recalls Dima. “At first I presumed it was just being examined, but it kept crying, so I went out in the corridor to look. There were nurses drinking tea, relaxed, and not reacting to the crying, so I thought a doctor must be in with the child. When the loud crying still didn’t stop, I just had to check, so I let myself in. The room had four cots, but the rest were empty. The baby was a boy, about six months old. He was alone in the room, and he was lying undressed on a wet mattress.”

“You can understand my shock. I was mad at the nurses, asking ‘how could they drink their tea while he cried like that?!’. I found what they told me next the most shocking thing. They said ‘this child was abandoned by a HIV positive woman and we don’t know if he is positive or not, so we won’t touch him’.”

“I thought this was beyond scandalous. We went out and bought the best mattress and furniture for the room, which was allocated for babies abandoned by mothers living with HIV, or so-called ‘AIDS-babies’ at the time. We stayed to watch the room for three months to make sure that what we provided was not removed and taken for other parts of the hospital.”

“This was when and why I became an activist. It had much less to do with my own HIV status. It was the shock of that experience, seeing how a baby could be treated, that had such a powerful effect on me.”

“I knew that women living with HIV were being put under huge pressure to give up their babies. But none of them knew that this was how their child would be treated. There are no words to describe how I feel about this.”

“Everyone has the right to choose to have a family”

Dima explains that most babies in that situation in the 1990s would have remained in an institution, that most wouldn’t have experienced family life.

“Adoption used to be difficult for abandoned babies. Their life-expectancy was estimated [often incorrectly] to only be a year or two, which put off many potential adopters. Potential parents living with HIV themselves may have had a different viewpoint, but it was only in 2019 that a law preventing people living with HIV from adopting children was overturned.”

For activists, challenging the legal progress went hand-in hand with raising awareness, it was necessary to change perceptions around HIV to change the law: “Potential parents are less worried about adopting a baby or child living with HIV now that there is more information. It is an issue that 100% LIFE has worked hard on.”

“All people living with HIV in Ukraine have had to overcome some obstacles, or break the law, in one way or another, just in to live their life and fulfil their reproductive rights or their right to a family. Whether it was to overcome laws around adoption, IVF, or forced or coerced abortion or sterilization.”

“Why should someone living with HIV be denied of being a parent?”

It was 6 or 7 years after his HIV diagnosis that Dima started treatment. “By that point my immunity was badly affected and I had TB and Hepatitis C. It was literally my survival therapy. If hadn’t started then, I wouldn’t be alive now.”

“My biggest desire was to be a father, but at that time when my treatment started, when I was in a hospital with three diseases, I wouldn’t have dared to dream.”

“My kids give me energy and motivation every day,” Dima scrolls through his phone, filled with pictures of his children, with a big proud smile on his face.

His eldest is just a couple of years younger than what Dima was when he first went to prison.

“When I was in prison the final time, I decided I was going to live my life in a positive and optimistic way, even then, with with no bed and just a 60cm window. I decided I was happy about the possibility of being able to walk in the street again; the opportunity to call up a friend; happy to sit and read a book.”

He hasn’t used drugs since his last jail sentence, around 20 years ago. And he’s done more than read a book – he has written one. 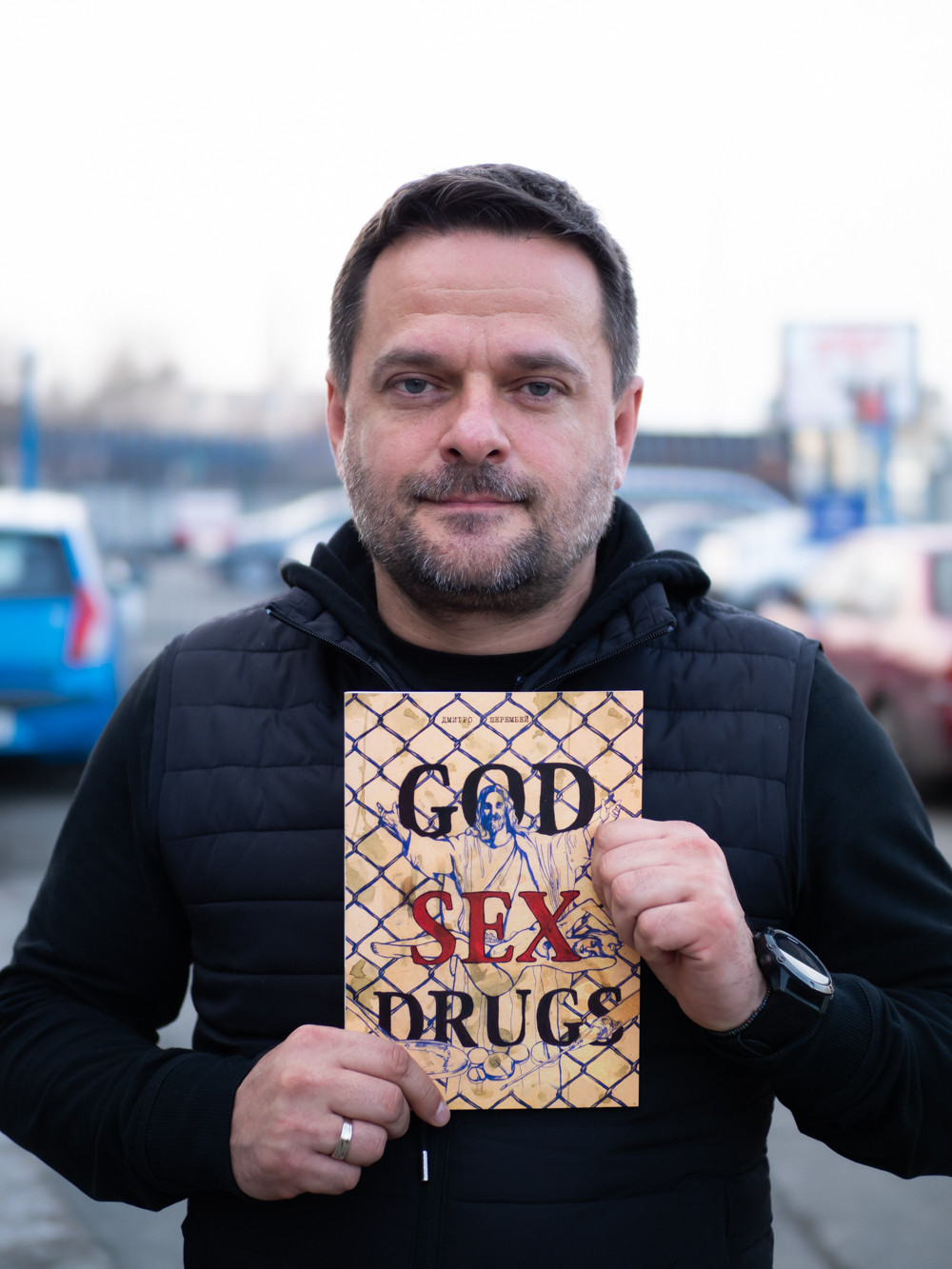 Dima’s 2019 bestseller had opiates literally running through the pages. “We poured drugs into the ink”. © Gemma Taylor/Make Medicines Affordable

God, Sex and Drugs, published in 2019, made the top three in Ukraine’s list of bestsellers at the biggest national book fair ‘Knyzhkovyi Arsenal’. The first edition has opiates literally running through the pages. “We poured drugs into the ink,” explains Dima.

It was every expensive to make. The drugs cost a lot of money on the black market,” he laughs. We made 99% less profit on the book because of the cost of the drugs.”

This creative decision helped draw attention to some of the socio-political and legal issues that the book addresses. “What is legalised or criminalised is arbitrary. You will arrest me if I carry drugs, but I can take this book through an airport, with an illegal amount of drugs between the pages? It is an individual’s choice what they do with drugs and so it should be decriminalised. We should take the approach of ‘support don’t punish’ – which also costs less.”

Dima’s childhood and early adulthood was “punishing”. He is providing the support to others that he didn’t have himself, and the target is to achieve more legal, long-term changes which put people before profit.

“It’s a different time when I was growing up. It was the time when the Soviet Union collapsed. I’d say it was a harsh time. I was on my own at 14. Did I feel like an adult? No, but I tried every drug going. It was a time of experimentation because we didn’t know about any long-term consequences of using drugs, or anything about HIV or Hep C.”

“Children just need happiness in childhood. It’s the most important thing that I, or any adult, can give.”