Our partner, the AIDS Access Foundation in Thailand, has produced a series of infographics, highlighting who is filing for patents on medicines in the country and showing some of the dramatic flaws in the system.

This includes highlighting an extreme example of ever-greening, with six patents and a total monopoly period of 31 years on one drug. Ever-greening is the process of using unmerited arguments for of keeping patents fresh, which translates into pharmaceutical companies continuing to make exorbitant profits at the expense of patients

The first infographic below shows how in an 11 year period (1999-2010) an incredible 82% of patent applications in Thailand were examples of ever-greening, and unfortunately 72% of granted patents also fell into that category.

“Almost three-quarters of the patents granted on medicines in that period were unmerited. It is almost unimaginable to consider how much money could have been saved and therefore redistributed to get more patients on treatment,” says Chalermsak Kittitrakul, Campaign Director at AIDS Access Foundation in Thailand.

“Some of the reasons for patent extensions include a new combination of drugs; a different composition; or a different method of taking the drug – all of which rely on old science, and therefore do not constitute ‘new or innovative’ or a significant breakthrough which is of benefit to the patient, or justifies the profits being made.”

One example of ever-greening, shown by the next infographic, was on the drug Atazanavir, which is recommended by the WHO as a component of second-line antiretroviral treatment regimens for adults living with HIV.

Two patents on this drug are expiring soon, but there are four more, with the latest not due to expire until 2028. The price can be as high as $240 per patient per month, compared to $33-46 for the generic version produced in India.

So who benefits from all of this?

Well, clearly it’s the pharmaceuticals’ profits, which are largely internationally based. Of the patents granted in the same 11 year period (1999-2010) 0.5% were filed by Thai corporations. 95% of granted patents were filed by drug companies in the USA and EU.

“This track record of granting plentiful unmerited patents is not in Thailand’s interest. These decisions line the pockets of multinational companies instead of ensuring that decisions made are both cost-effective and in the interest of public health,” says Kittitrakul.

“By employing this tactic, it has discouraged research and development on new generic medicines by the local manufacturers. Delay in the introduction of new generic drugs to the market means an extended period of no competition, which is an essential device to lower the prices and scale up access.”

“The Thai government is recognised internationally for committing to free ARV treatment for everyone who needs it, which we applaud. However, unmerited patents make it significantly more expensive to achieve this commitment,” he explains.

“We are deeply concerned that there are already essential steps required to tighten up the system for the sake of Thailand’s finances and public health, and yet a proposal is on the cards that would make the current situation even worse.”

The Prime Minister, Gen Prayut Chan-o-cha, is considering expediting the approval of over 12,000 patent applications, including over 3,000 applying to medicines, which are currently bottle-necked in an applications examination process. The Thai government is known for its pro health stance on intellectual property issues, yet this would be a major backward step for public health.

Read more here, and see the third infographic below. 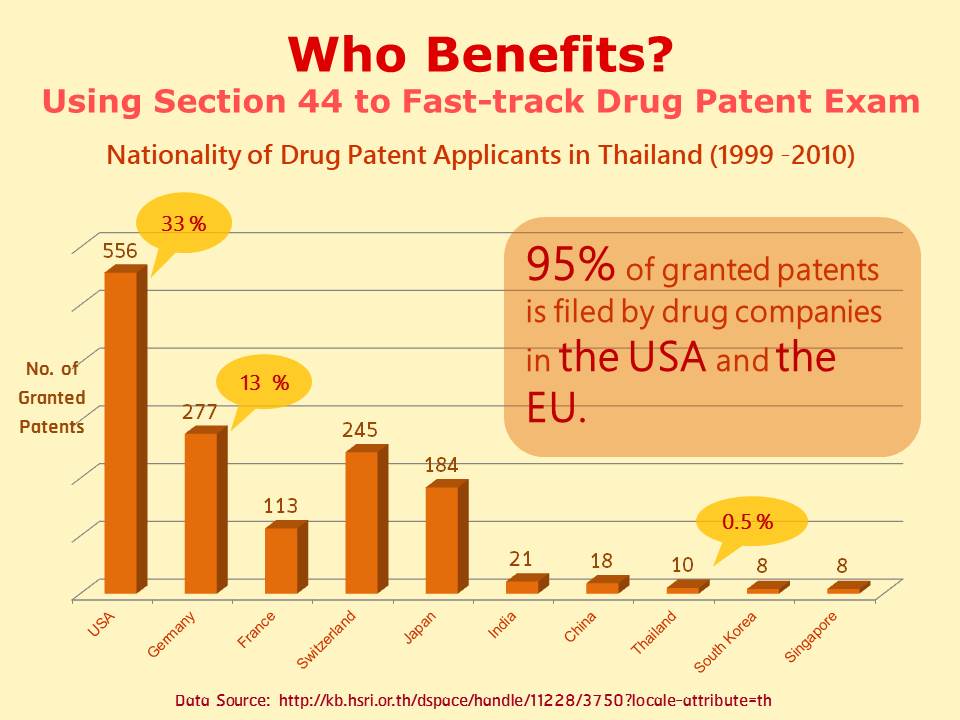