100% LIFE’s is the MMA campaign partner in Ukraine. 2021 marks the organization’s 20th anniversary and 30 years of Ukraine’s independence from the USSR.

Here, activists and people living with HIV, TB and Hepatitis C share their personal experiences and motivations – from the defining moment that led Dima to dedicate his life’s work to the rights of people living with HIV, to how Russia’s ongoing occupation in the Donbas region resulted in Valeria risking her life to get essential treatment to prisoners.

100% LIFE’s work has been effective in reforming the country’s patent laws and reducing the price of many essential medications. However, it’s only worthwhile if the meds get into the hands of the people that need them and there’s a lot more still to be achieved. That’s why 100% LIFE’s work is holistic, from challenging stigma, to opposing pharma, and fighting government corruption.

Constitutionally, everyone in Ukraine has the right to free healthcare, but the reality is different. Overpriced medicines put a strain on the health budget; and there’s still a lot more to do to reduce HIV-related stigma to encourage people to come forward for testing and treatment.

“‘AIDS was the 20th century plague’, that’s what the posters in all the health clinics told us. ‘A death sentence’. The doctors backed it up when they gave me my diagnosis and prognosis: ‘HIV positive’, they said, ‘don’t expect to live more than two years’. I went and got a hit. There was no point in giving up drugs now, I was dying anyway. Two years later, I was still alive, and I decided to go to rehab”  – Natalia, friend and former colleague of 100% LIFE.

“I visited other countries for work, Germany, the UK, and other places, I saw the side-effects of early HIV treatment. In 2004 I jumped at the chance of treatment, it was a huge relief. I wasn’t concerned about the side-effects… The people I’d met on my travels around Europe were still so positive, and attractive – and they were alive” – Natalia. © Supplied by Natalia

“It’s an ongoing fight. Every year I visit the rehab centre to say hi to the director there and let them know that I’ve been OK for another year. I’m lucky – life has been pretty good. My tattoo says ‘YOLO – you only live once’. So live it – and help others to live theirs” – Natalia.

“I was visiting someone at the hospital when I heard a baby crying in a neighbouring room… The baby was a boy, about six months old. He was alone in the room, and he was lying undressed on a wet mattress… [The nurses told me] ‘this child was abandoned by a HIV positive woman and we don’t know if he is positive or not, so we won’t touch him’. This was when and why I became an activist” – Dima, Head of 100% LIFE’s Coordination Council.

100% LIFE’s projects directly and significantly contributes to testing and treatment. Their work is literally life-saving. It also makes a dent in pharmaceutical profits. “This is why they would like to shut our mouths, to stop us making noise, but we are stubborn and will never give up. The extent to which certain politicians are concerned by us, is a sign of our success, and also of what is at stake for them” – Dima, holding his book inspired by his own experiences as a drug user, as someone living with HIV, and has been treated for TB and Hep C, and as someone who fights for human rights.

Vera describes being treated as though she was “worthless” during her first pregnancy and labour. The humiliation and stress that she went through as a first-time mother influenced her to become the activist that she is today. It directly led to her to establishing Kyianka+, a support group for other women living with HIV.

“When a woman is diagnosed with HIV the first essential thing she needs is acceptance. You must wrap her in love, care and support – like a baby” – Vera.

“After my wife’s labour, the same medical staff [that had treated her badly on account of her HIV status] made sure we would never have another child. This baby would be our last baby.” Andre’s wife gave birth by C-section and was sterilized without her knowledge. The couple only found out after struggling to conceive. Andrei is a minister of the Baptist Church in Ukraine. “To serve God is to serve people. Being an activist I serve people by speaking openly about my problems, about my HIV status. Being open helps reduce stigma in the congregation and community.”

“I talk to people about HIV, and I’ve also organised testing,” says Danylo (name changed). “I’ve been sharing facts about HIV since I was 11, when I first found out I was living with HIV… There’s still a lot of stigma that exists in Ukraine, and some crazy myths. Like what? Well, one rumour is that HIV is a biological weapon, developed by America to harm citizens in other countries. The KGB spread the myth in the 1980s and some people still believe it now. I had a friend who was quite aggressive in his attitude towards people living with HIV. I didn’t tell him that I’m HIV positive myself but I was able to change his opinion, he no longer thinks people with HIV are ‘dangerous’.”

As a travel journalist, Krystyna was used to taking two weeks out of her life at a time. However, when she was diagnosed with TB, she was told she would have to be hospitalised for 6 months. “I had to work, pay my rent, look after my daughter, how could I? Compared to many others, I was lucky, but even with all the support from family and friends, recovering from TB was steeped with challenges.”

“After I was cured, I was offered a month’s stay in a sanatorium… The sanatorium’s director chatted to me, and he gave me the best room when he realised I was a journalist. One day, I was waiting at a bus stop when he pulled up in a really old soviet car. He was off to Kyiv, he tells me, a meeting with the Ministry of Health 600km away. Back at the sanatorium I noticed two or three really expensive black jeeps parked round the back. When I asked around I found out they were the director’s and his wife’s. Wow, I thought, he gets out a shitty car especially to go and see the authorities in!” – Krystyna.

Sergii is 100% LIFE’s Policy and Advocacy Director. He’s part of a team that works on strategies to remove intellectual property (IP) barriers and increase access to essential medicines. It’s challenging but vital work. He explains how in one example: “It took 5 years to stop overpaying for a HIV drug – even when patent barriers didn’t legitimately exist.” If civil society don’t work on these challenges overpricing would continue unabated.

“I don’t have many older pictures to show you,” says Valeria. “We had to leave our home, and everything in it. It’s all still there, but we can’t go back.” One of the few old photos Valeria still has is of her grandma. “Her name was Zinaida and she may have been the Soviet Union’s first feminist! She motivated us to be winners, to protect people that cannot protect themselves, and tell the truth loudly.” 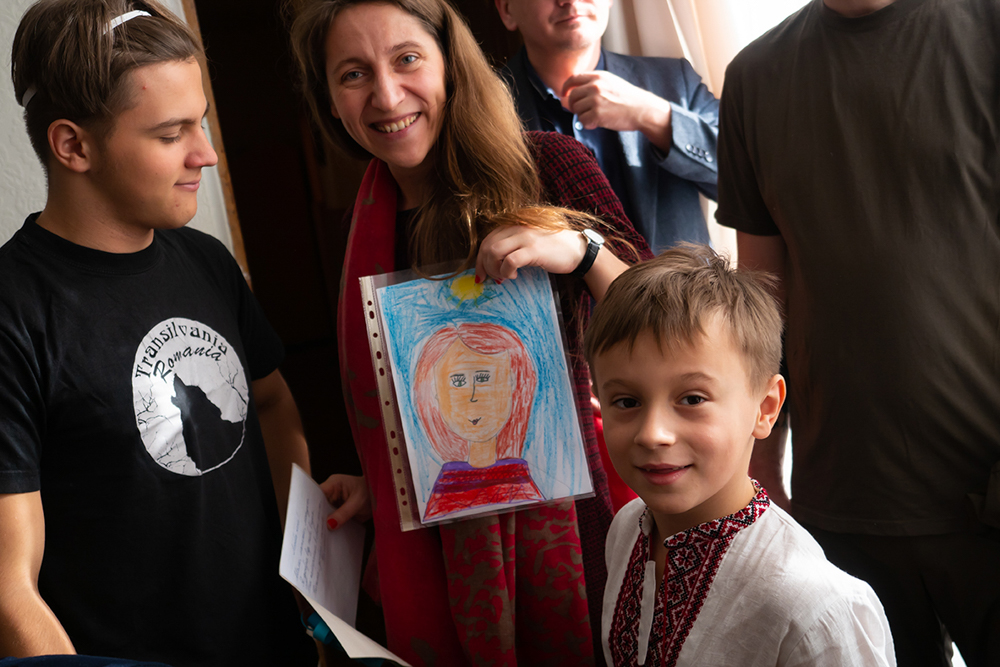 When the war in Donbas started Valeria sent her boys away to safety, thinking it would just be for a couple of weeks. When it didn’t stop, her and her husband had to leave too. They soon returned though, to see what the community needed. “The first day we got back I went straight to the prisons… I was told they were down to the very last of the HIV medications. Doctors couldn’t make deliveries themselves because it was too dangerous. We contacted large institutions with peacekeeping and humanitarian mandates to see if they could help, but we were told they couldn’t help either because of ‘security rules’, or ‘because of the shelling’, or ‘it’s not our mandate’. I was aghast – I suddenly realised that if we didn’t do it no-one would do it. I thought no-one gives a fuck about our fucking HIV. I was furious. So we did it. We did it without armed vehicles, international protection, protective gear and big salaries.”

Valeria is now settled in Kyiv with her two boys. “My kids can never go back… I was 21 when I had my first son. I wanted him to have a ‘full package childhood’, a father, a house, etc. His small world was so good and then it just stopped, it was taken away. I know it’s not my fault, but I still feel guilty that I couldn’t protect him…My friend lives with us too, four of us in this apartment. Before the war he had a successful business, and his own big house. Now he sleeps on the floor under my son’s desk. He’s 48”.

“It’s thanks to treatment that I can be safe and live the life I have. But when I think about the price of this bottle, $61 for a month, it makes me crazy because the generic one costs just $19 in other countries. If it was priced the same here, the HIV budget could go three times as far” – Valeria.

“The HIV epidemic can be ended, but the message is not getting out. In 2017, when CDC endorsed the U=U message (undetectable = untransmittable) I thought it would make headlines in every paper around the world. HIV is an issue that affects around a billion people, 38 million people living with virus, plus their families and partners. U=U changes everything, but you forgot to tell the whole world” – Valeria.

“If people know it’s not dangerous – that you can kiss them, you can fuck them, just make sure your HIV positive partner is on treatment – it would reduce stigma and more people would access testing and treatment as a result” – Valeria.