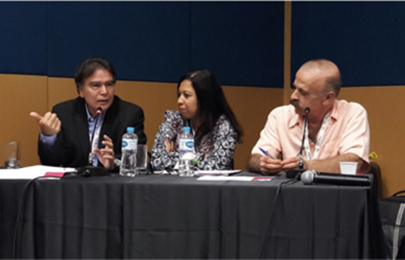 Symposium in Curitiba highlights the need for a collective fight to make medicines affordable. When governments are unreceptive, it is even more important that there’s a strong civil society to respond.

A symposium, ‘10 Years of the Compulsory License of the Efavirenz’, took place on 29 September 2017 in Curitiba, Brazil. Our partner, the Brazilian Interdisciplinary AIDS Association (ABIA) and the Working Group on Intellectual Property (GTPI) held the side-event during the combined 11th Congress of HIV/AIDS and the 4th Congress of Viral Hepatitis.

The event’s aim was to learn from the compulsory license on Efavirenz and to discuss the paths currently available in order to guarantee access to medicines. The discussions highlighted the commitment required by governments and civil society, and how a strong civil society is all the more necessary when government commitment is weak.

The case of Efavirenz

The former Health Minister of Brazil, José Gomes Temporão, was the guest of honor. Temporã explained the complexity of the process in obtaining the compulsory license on Efavirenz back in 2007. He remembers how, when he joined office, he became aware of “the whole movement involving patients and the struggle for rights”.

At the time, Merck was charging $1.59 per pill, while in India the same medicine cost $0.45. Only about 40% of patients living with HIV were accessing the medicine in Brazil. In the course of the negotiation process, Merck offered a 30% reduction that would reduce the price per pill to $1.10. “We wanted at least $0.65 … so from the beginning we put together a very solid strategy to enforce compulsory licensing because we realized there would be no agreement,” Temporã states.

Temporão recalled how when they reached the legal stage that precedes the compulsory license, pressure piled on: “The ambassador of the United States at the time called me 15 times a day to broker a deal”.

The last offer was made by the Brazilian government to the pharmaceutical to buy Efavirentz at $0.45 per pill. When the offer was refused President Lula signed the decree (no. 6.108 / 2007) making the compulsory license official.

Temporão also remembered the tone of the coverage in Brazil’s specialized press: “It was a dubious speech, while saying that the patients were happy, they argued that the measure could complicate the economic scenario with commercial retaliation and unfeasibility of new business”. The former minister said though how actually the compulsory license not only surprised Merck but also had an effect contrary to the expectation projected by the media, with producers rushing to the Ministry offering discounts of 50 to 60%.

The compulsory license was a step that became fundamental to a policy which viewed the state’s purchasing power as directly linked to enabling and increasing national production. “This vision was implemented by me, by the minister Padilha, and others who continued it. However, at the moment, I fear that it is threatened because this proposal is part of a vision of development, sovereignty and health in a wider context of society that is not represented in this current government…” said Temporão.

Renata Reis was among the other attendees, ABIA’s representative and former coordinator of the GTPI. Reis stressed that in the current context, the path for civil society is to come together on related issues: “There is no solitary fight on the topic of medicines, there is a collective struggle that needs to involve other movements, pathologies, countries. The answer will come from a collective environment,” she said. Reis believes we should fight based on human rights principles and fight using the judiciary process when necessary.

Activist, Jorge Beloqui, reinforced that the social movement must be organized. He also emphasized how: “We have to make ourselves heard even if this government is not permeable to the demands, and we must also prepare ourselves for the next elections and for the passage of government”.