We join our partner in Thailand, and activists around the world, to pay tribute to Dr. Mongkol Na Songkhla, a man who refused to allow private companies to trade with people’s lives.

There is a saying in Thailand, that it takes a triangle to move a mountain: the creation of knowledge, the social movement, and political involvement. Dr. Mongkol provided the essential political leadership and support.

We look back at the decisions he took between 2006 and 2008 which created real change for millions, and which countries can still learn from today.

To add your condolences, and support for the precedents he set, please scroll to the bottom of the page. 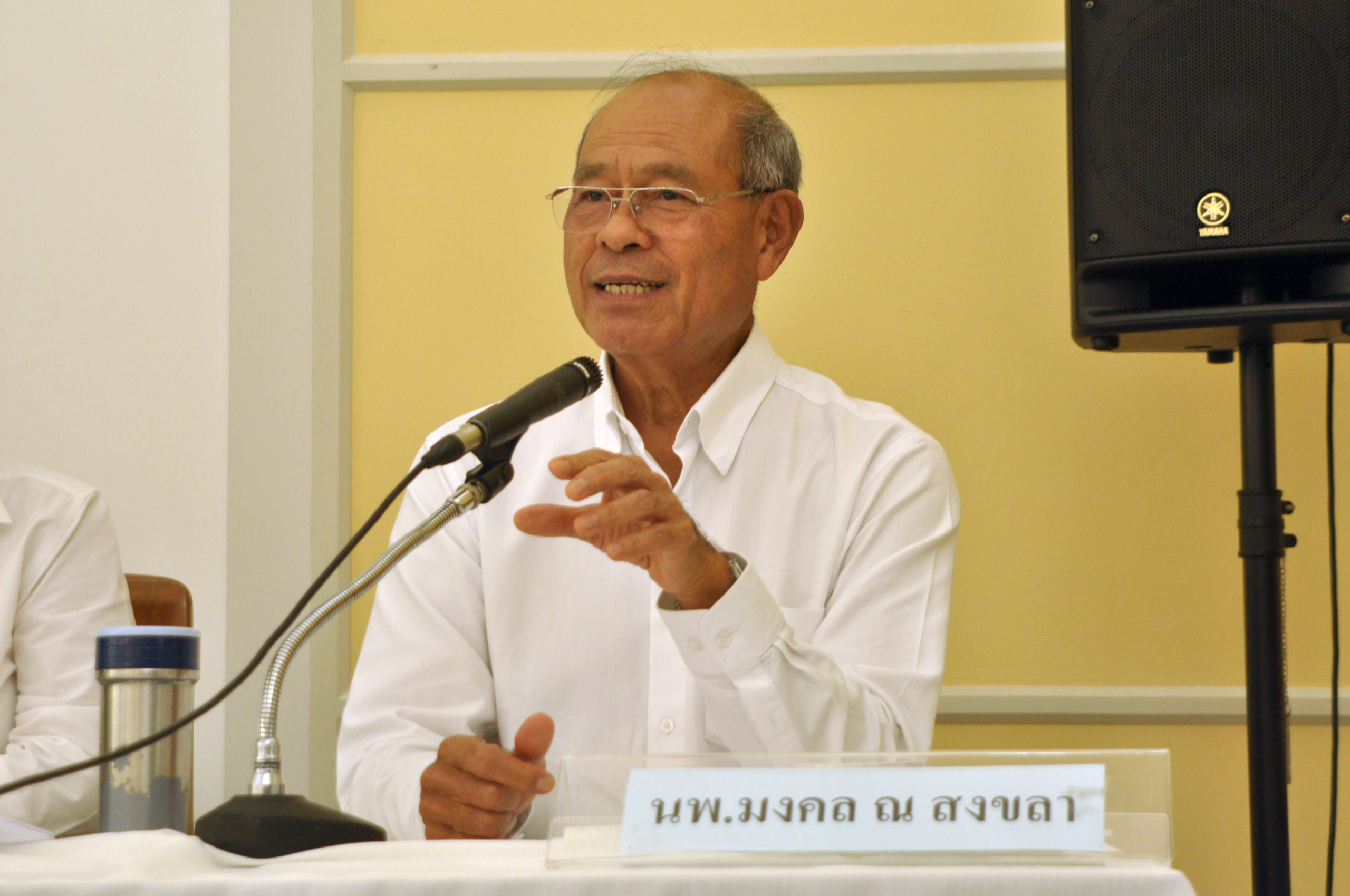 Dr. Mongkol Na Songkhla (1941-2020). The Public Health Minister who made the unprecedented decision to invoke a public health safeguard – a compulsory license (CL) – to address the lack of lifesaving medicines at affordable prices, a decision that would save millions of lives of people living with HIV and patients suffering from cardiovascular diseases and cancers. Minister of the Ministry of Public Health, Thailand, 2006 – 2008.

Thailand is recognized globally as one of the countries successful in tackling HIV & AIDS and promoting the right to health through the national health security system, which provides quality healthcare services for all its citizens.

A significant intervention, that has contributed to the success of this model, took place during the period 2006 – 2008, when Dr. Mongkol Na Songkhla, who was the Minister of the Ministry of Public Health for Thailand, made the unprecedented decision to invoke a public health safeguard, known as government use license or compulsory license (CL), to address the lack of lifesaving medicines at affordable prices, that could save millions of lives of people living with HIV and patients suffering from cardiovascular diseases and cancers.  Access to affordable medicines, as a result of the compulsory licenses granted in November 2006, January 2007 and January 2008, has enabled the Thai national health insurance schemes to scale up access to treatment and improve healthcare services.

HIV & AIDS was a critical health catastrophe causing a high mortality rate amongst people living with HIV in Thailand.  Almost 600,000 Thais lost their lives to HIV & AIDS since the outbreak in 1980s.  Lifesaving anti-retroviral drugs (ARVs) were not accessible for all who needed them due to their exorbitant prices.  Thousands of people living with HIV could not afford ARVs and the government with its limited health budget was unable to provide the lifesaving drugs for all. Networks of people living with HIV & AIDS had constantly advocated for access to treatment and they finally succeeded in October 2005 – when the Government Pharmaceutical Organization (GPO) was able to produce a triple cocktail of ARVs at low cost from the off-patent medicines and the government announced the extension of the health benefit package of the national health insurance system to cover ARV treatment.

However, a large number of people living with HIV, who had already developed drug resistance or could not tolerate unpleasant side-effects of the basic ARVs, needed more-advanced ARVs. At the time, Efavirenz (EFV) and lopinavir/ritonavir (LPV/r) were recommended as second-line ARVs.  But the prices of EFV and LPV/r marketed in Thailand by the originator companies were twice the prices of their generic versions in India.  The health budget allocated by the government was insufficient for the country to acquire the second-line ARVs for distribution to those who needed them.  The budget allocated for health services for people living with HIV under the national health insurance system for the fiscal year of 2007 was limited to 3,855 million Baht (USD 128 million) for the target group of 108,000 patients.  Therefore, being able to domestically produce or to import generic versions of HIV antiretroviral drugs into Thailand to substitute the originator versions would lead to the price reduction and the increase in accessibility for patients to these ARV drugs.

In addition to HIV & AIDS, ischemia heart disease and cerebrovascular disease had the most serious public health burden in Thailand leading to high mortality and disability. The mortality rate was in the top three annual ranking. Both diseases cause significant DALY loss and were in top ten ranking across genders in Thailand. In terms of treatment requirement, it was estimated that only 45 million people under the Universal Health Coverage scheme (UHC) would need 20.5 million pills per year. However, with the high prices charged by the originators and the limited budget, only 20% of patients covered under the UHC scheme could access the medicines required to treat heart disease. It was estimated that, instead of the monopoly situation created by the patented medicines for heart diseases, if there was market competition through imports or locally produced generics, the price would reduce dramatically and accessibility would increase by 6 to 12 times which would conform to the universal coverage policy.

Similar to heart diseases, cancers (especially lung and breast cancers, leukemia and gastro-intestinal stromal tumours) have also continuously ranked among the top leading causes of death in Thailand. Patients face both suffering from severity of the disease as well as the high cost of treatment. These create a serious burden, in particular economic burden, for patients and their families. Many low and middle-income families faced serious financial catastrophe or even bankruptcy dealing with the cost of cancer treatments.

Originator drugs required for the treatment of HIV, cardiovascular diseases and cancers were very expensive in Thailand because of the patent protection on these drugs which enable patent holders to have market exclusivity without competition. Neither the GPO nor other pharmaceutical manufacturers can domestically produce or import generic versions of the drugs to be distributed and used in Thailand.

Although the Ministry of Public Health has the power to immediately exercise the right under any patent by virtue of section 51 of the Patent Act, the Ministry of Public Health did try through all means to first negotiate with the patent holder for several months. The negotiations, however, did not reach an agreeable solution. Although price reductions were offered by some of the patent holders, these were still much higher than prices of the generic versions. In addition, conditions imposed by the patent holders in exchange for the lower prices would have created many hurdles in the drug management system. The Ministry of Public Health, hence, could not let people living with HIV, with heart diseases and with cancers under the major health insurance schemes wait for a cheaper- or reasonable-priced drug without time limitation.

The Doha Declaration on the TRIPS Agreement and Public Health affirms that each member country of the World Trade Organization (WTO) has the legitimate right to enforce public health safeguard measures in the WTO’s TRIPS Agreement to address public health challenges, in particular to promote access to medicines for all.  In this regard, the Thai Patent Act empowers the ministry, sub-ministry and department to exercise the right under any patent without prior authorization of patent holders so as to provide public service and benefit as mentioned above.

In response to the ongoing public health calamity due to the lack of lifesaving medicines at affordable prices, Dr. Mongkol Na Songkhla, the Minister of the Ministry of Public Health for Thailand in 2006 – 2008, made the unprecedented decision to exercise the right under the Article 51 of the Thai Patent Act. This provision in compliance with the  TRIPS Agreement and the Doha Declaration gives the power to issue compulsory licenses on patented drugs and allowed for the importation of generic drugs from India for the purpose of the non-commercial use and public interest to provide treatment to all patients in the national health security schemes. The drugs under the enforcement of compulsory licenses are 2 HIV drugs: efavirenz and lopinavir/ritonavir, 1 cardiovascular-disease drug: clopidogrel, and 4 anti-cancer drugs: docetexel, letrozole, erlotinib and imatinib.

As a result of the grant of the compulsory licenses, the national health insurance system procured generic versions of those medicines, at the prices of 80% – 90% lower than the originator drugs’ prices in Thailand. The lower priced generics resulted in the treatment of an additional 25,000 people living with HIV with efavirenz and an additional 7,000 people living with HIV with lopinavir/ritonavir in the 5 years after the issuance of the compulsory licenses.  Based on data updated in October 2020, over 500,000 people living with HIV in Thailand now access ARVs under the national health insurance schemes.  The number of patients with access to clopidogrel increased to at least 40,947 over the five-year period. For the four anti-cancer drugs, the increases in the five-year time are at least 8,916 patients for letrozole, 10,813 for docetaxel, 1,846 for imatinib, and 256 for erlotinib.

The Universal Health Coverage (UHC) scheme (one of the three main national insurance schemes covering 78% of the total Thai population) acquired a saving of over 6 billion Baht (USD 200 million) in 2009 – 2011 from the enforcement of compulsory licenses.  It is estimated that every saving of 300 million Baht (USD 10 million) allowed a scale up of accessibility of ARVs for 10,000 persons.  In addition, the UHC scheme could reallocate a saving of 1,500 million Baht (USD 50 million) to improve health services for patients with kidney failure.

The decision to grant compulsory licenses by Dr. Mongkol Na Songkhla also acted as a good example for other developing countries that the TRIPS public health safeguard is not limited for the use to address HIV challenges only. Thailand complied with the Doha Declaration that affirms TRIPS Agreement does contain a degree of flexibility permitting governments to consider different options when formulating laws and policies related to patent protection and public health, including the use of compulsory licenses.  After issuance of compulsory licenses on the patented drugs used for the heart-disease and cancer treatment by Thailand in 2006 – 2008, the Indian patent office approved a request of a generic manufacturer to impose compulsory license for an anti-cancer drug, sorafenib tosylate, in 2011.  Recently the Malaysian government issued a compulsory license on sofosbuvir, a medicine used for the treatment of chronic hepatitis-C injection, in 2017.

Global civil society has long recognized Dr. Mongkol Na Songkhla’s courageous decision on the enforcement of the legitimate public health safeguard to address the health needs. There is a saying in Thailand that it takes a triangle to move a mountain; the creation of knowledge, the social movement and political involvement. Dr. Mongkol Na Songkhla and the Ministry of Public Health under his guidance showed the importance of political involvement and leadership in the use of TRIPS flexibilities to safeguard health. His decision enabled the national health insurance schemes to significantly increase accessibility to treatment and improve the quality of the country’s health services. His action also became an inspiration for other developing countries in adopting compulsory license as a tool to overcome public health threats due to patent barriers. The Thai compulsory licenses remain among the most important uses of the Doha Declaration on TRIPS and Public Health that affirms the WTO’s member countries’ legitimate right to use public health safeguards and put people’s health before trade.

To offer your condolences and add your support for the precedents set by Dr. Mongkol Na Songkhla set, please email Chalermsak Kittitrakul to add your name below.