Vera was treated like she was “worthless” during her first pregnancy and labour.
The humiliation and stress that she went through as a first-time mother influenced her to become the activist that she is today. It directly led to her to establishing Kyianka+, a support group for other women living with HIV.

Vera talks to Make Medicines Affordable about her own experiences, 18 years ago, and the issues women living with HIV in Ukraine are still facing today.

Women living with HIV are more likely to experience violence than women who aren’t.

In Ukraine, 35% of women living with HIV have experienced violence from a partner or husband, compared to 19% of women who do not have HIV, according to a survey carried out by Positive Women. 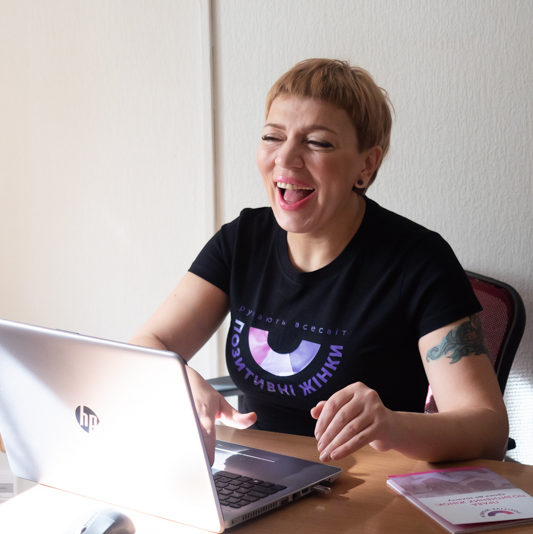 “HIV-related stigma and discrimination makes women more vulnerable to violence,” explains Vera Varyga, a board member of Positive Women, which carried out the 2016 research, and follow-up research and analysis.

Vera, 47, is also the founder of Kyianka+, a self-support and empowerment group based in Kyiv, which tackles self-stigma for women living with HIV, as well as stigma and discrimination from other sources. She is also an activist with 100% LIFE, our campaign partner, and the largest patient-led organization in Ukraine.

“Women’s rights are frequently denied to them – their reproductive rights, their parental rights, and their access to legal representation. We see cases of domestic violence where a women is scared to leave an abusive marriage because her husband has threatened to reveal her HIV status if she does. Even if he himself is living with HIV, he can still use her status as a form of control. Of course, usually when this happens, there was already an issue with inequality or abuse prior to the woman’s HIV status being known.”

2019 data published by Positive Women found that 41% of women living with HIV do not know their rights. “We see too often how a woman’s HIV status can be used to manipulate her and how it is difficult for her to challenge her position.” Vera refers to a couple recent cases:

“Victoria (name changed) was prevented from seeing her children by her husband. He claimed she was ‘dangerous’ because she is living with HIV. Victoria sought help from medical practitioners and the council, but this only strengthened her husband’s position, rather than helping her to see her children.”

“In another case, after a couple divorced, the ex-husband let people they knew locally that his ex-wife was living with HIV. Other mothers in the area protested against her child being allowed to attend kindergarten and mix with their children,” says Vera. “It’s very ostracising, especially in some more rural places still.”

Kyianka+ aims to increase women’s knowledge of their rights, along with their self-esteem and to build the confidence to demand them. Everyone in the support group has their own experiences to share, including Vera.

“How can you even think of giving birth to that baby”

“My work is motivated by my own experiences,” say Vera. “I tested positive for HIV when I was pregnant in 2002. There was no treatment available in Ukraine at the time. I was 29 and a first-time mother. The doctor didn’t speak directly to me. Speaking via my father, he tried to pressure me into having an abortion. I felt full of life, I wanted to keep my child.”

“The doctor screamed at me, saying ‘how can you even think about going through with the pregnancy, in your situation!’. He told me that the baby would only survive a year, and that I would only live a couple of years without treatment. He said I should ‘give the child up and pretend it died during labour, so no-one would need to know that I had HIV’.”

“What the doctor said made me scared that I would outlive my child – and not by very long. A lot of women still fear this, or the reverse, that they will die first and their child will be left alone. Many women were pressured into giving up ‘AIDS babies’, as they were referred to by medical staff and the public back then. Many of these babies are still growing up in homes with their mothers believing they are dead.”

“When I went into labour, my medical card was stamped with ‘HIV’ in big red letters. It was humiliating. During my son’s birth no-one spoke to me, except to shout at me. No-one touched me except to kick me, or to pull me back when I tried to move into a comfortable position. I was given something to expedite the birth. There was a lot of blood and a lot of pain.”

“I was in a room with one other woman. A prisoner, also living with HIV. She gave birth in handcuffs.”

“After the birth, if I went to doctor or dentist, they seemed scared of me. They didn’t even want me to use their pen. It was difficult to deal with anyone in a position of authority. As a result, I didn’t get the social security support I needed so it was a financial struggle on top of the stress.”

“My lovely, healthy son is now 18 and I also have a second son, age 11. I’m glad to say things have drastically changed, it was much easier and much more respectful the second-time round, and both my son’s were born without HIV.”

“When a woman is diagnosed with HIV the first essential thing she needs is acceptance. You must wrap her in love, care and support – like a baby” – Vera. © Gemma Taylor / MMA

“I finally got some help about a year after my son was born. My older sister visited from Russia for my father’s funeral, I had been looking after him up until his death from cancer.”

“My sister found some information for me, about HIV, and about an AIDS centre in Kharkiv about 100km away. I hadn’t been able to do this for myself, I had no resources, either emotionally or financially. I didn’t want to draw attention to myself by asking for help – many people die at home rather than ask for services.”

“At the AIDS centre I was surprised by the friendly attitude of others. The doctor looked at me directly, without judgement or condemnation. I cried with relief and happiness. In the evening I went to a group meeting which was held at one of the women’s homes. They embraced each other, they smiled, they laughed. This was not what I imagined HIV could look like. This day was the starting point of a new life.”

“The support I received helped me reduce my self-stigma. Without that I wouldn’t be on treatment now,” says Vera. “The stigma and discrimination I experienced was definitely a barrier to me asking for help or treatment.”

“Soon after that first meeting, I moved to Kharkiv and began work as a volunteer in a children’s boarding school. By 2005, just three years after giving birth, I was what we describe in Ukraine as ‘open-faced’, I was open about my HIV positive status and I spoke to other women living with HIV and started information campaigns.”

“It is important as activists to be open about our status. We do this for the women who can’t, who it is much harder for. It is our role as activists to say ‘I live with HIV, I’m healthy and I know my rights’.”

“It has not been easy. It is not in our culture to casually or easily tell other people about our problems, but I believe that optimal, affordable treatment goes hand-in-hand with reducing stigma. If more people in Ukraine see people like me, living a healthy life, the fear could be reduced and more people would ask for treatment.”

“However, we still won’t reach treatment targets unless we have gender equality, and gender-sensitive services.”

Time for a new era – with gender-equality

“Things have improved, although I’d say we are still living in a pre-historic era. It’s only now that the feminist movement in Ukraine is starting to become more visible and more vivid.”

“Thank God these days no-one would recommend that a woman should abort or abandon her baby against her will, but the sterilization after the birth is still sometimes promoted.”

“Women continue to experience discrimination in hospitals. It is not as brutal anymore, but it is common for women to be blamed for living with HIV, which then implies that they ‘deserve’ the disrespect or poor treatment that follows. How is it supposed to be your fault for how they choose to treat you during labour?”

“In my opinion it is high time to develop a tolerant attitude towards HIV. We need sexual and reproductive health and rights (SRHR) education in schools; we need celebrities living with HIV to speak out to change public perception; we need to eliminate stigma and discrimination in healthcare settings; and among police and lawyers. We need a period of significant transformation, otherwise there is still the risk that someone could be be treated the same way I was 18 years ago.”

“There remains so much interference with a woman’s personal and family life, her sexual and reproductive health and rights, her body. It needs to change much faster.” © Gemma Taylor / MMA

You can read Positive Women’s 2019 report here. Other findings included: