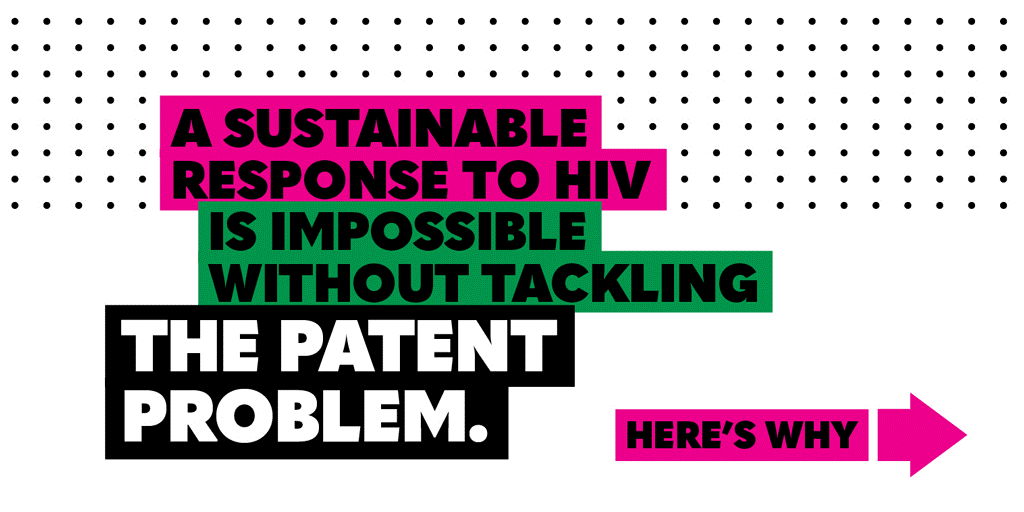 As UN member states and the global health community meet in New York to address the challenge of ‘moving together to build a healthier world’ we look at why, in 2019, when advanced HIV treatment exists, people and governments are still struggling to access these medicines.

In a new policy brief we warn that if the problem with patents, particularly in middle-income countries, is not tackled, life-saving medicines will remain out of reach for too many, and the progress made on HIV, which is already reversing, will spiral further down.

Since the world acknowledged the global AIDS epidemic in the 1980s much has changed. With better treatment and prevention options, AIDS is no longer seen as a death sentence. Better treatment for co-infections, particularly multi-drug resistant tuberculosis (MDR-TB) and for viral hepatitis have also emerged in the past decade.

However, despite the huge progress made, 1.7 million people acquired HIV last year and 770,000 died of AIDS-related illness. For those people – the parents, children, siblings, and friends who unnecessarily lost their lives – the declarations of success are hollow.

The UN High Level Meeting on Universal Health Coverage (UHC) takes place in New York today. As the event website states: “It will be the last chance before 2023, the mid-point of the SDGs [Sustainable Development Goals], to mobilise the highest political support to package the entire health agenda under the umbrella of UHC, and sustain health investments in a harmonised manner.” Tomorrow, 24 September, the WHO will also present the Global Action Plan for Healthy Lives and Well-Being for All, which outlines the ways in which key global health agencies will work together to deliver the SDG health goals.

UNAIDS, which NGOs have been criticising for years for its unduly optimistic reporting, has now acknowledged in its 2019 Epidemic Update that “the annual number of HIV infections has increased in three regions: Eastern Europe and Central Asia (29% increase), Middle East and North Africa (10% increase) and Latin America (7% increase)”. HIV advances that had been made, are now reversing.

The over-positive reporting resulted in a serious side-effect. Donors, with competing priorities, bought into the success narrative, and overall global funding for AIDS was reduced. Investment in the HIV responses of low- and middle-income countries decreased by $900 million in just one year.

We must act now to ensure the response is fully funded and barriers to accessing medicines, including to second and third line HIV treatment and co-infection treatments, are effectively tackled.

Frontline AIDS and the International Treatment Preparedness Coalition (ITPC) have released a joint report looking at one of these crucial barriers – the problem with patents in middle-income countries (MICS). In 2019, people aren’t dying because the drugs for treating HIV, MDR-TB, hepatitis C and many other other diseases don’t exist. People are dying because they can’t access them.

With an increasing focus on voluntary mechanisms to provide access to medicines, the problem with patents in MICs is being seriously over-looked; as are the legitimate tools that governments can use to increase access and availability and decrease prices. The use of legal mechanisms like TRIPS flexibilities by governments has proven highly effective; in the use of these legal tools, governments, global health agencies and civil society all have an essential role to play. It will not be possible to achieve a sustainable response to HIV without tackling intellectual property (IP) barriers, particularly in MICs.

The problem with patents

One of the most critical barriers that has existed since treatment for HIV was first approved relates to patents.

Patenting of medicines has increased considerably since 2005. More worrying is the trend of ‘evergreening’ patents. Evergreening is a tactic used by pharmaceutical companies to extend their exclusivity over a medicine by applying for, and usually getting, multiple, overlapping patents on a single medicine. Most medicines are covered by several patents, known as patent ‘thickets’ and are used to delay or complicate generic production.

Over-pricing as a result of unmerited and extended monopolies puts a huge strain on health budgets. While in theory a government may commit to universal access, in reality the budget may not stretch.

Prices for HIV treatment can vary from under $100 to tens of thousands of dollars per person per year (pppy) – for the same drug. Take dolutegravir (DTG) for example. In July 2019, the World Health Organization (WHO) recommended all countries immediately adopt DTG-based regimens as the preferred first-line treatment for HIV. Prices pppy range from $75 for countries that are in a ‘voluntary license’, up to $9656 for those that are not.

Typically, MICs are worst affected by the patent problem. Nearly 38 million people live with HIV and a majority of them live in MICs. The countries’ income classification means they are frequently left out of pricing deals or voluntary agreements and have funding reduced by health and development agencies, and so face the dual burden of high prevalence and high costs.

Evergreening is just one of the tactics employed by pharmaceutical companies to maintain monopolies and pave the way for this arbitrary pricing. Our report details other tactics as well as how they can be legitimately challenged.

Within the Sustainable Development Goals themselves our recommendations are backed. SDG3b reaffirms the right of developing countries to use to the full the provisions in the Agreement on Trade-Related Aspects of Intellectual Property Rights (TRIPS) regarding flexibilities to protect public health, and, in particular, provide access to medicines for all. Unless TRIPS flexibilities are more routinely put into practice we risk undermining the commitments made to the HIV response.

What you can do?

Civil society has an instrumental role in challenging patent abuse by pharmaceutical companies. While the new report reflects our focus on HIV and common co-infections, civil society will continue to work in solidarity across countries and across diseases.

Practical examples, from our own experiences, have resulted in significant price reductions. These include: forming buyers clubs; working on patent law reform; filing oppositions on low quality patents (both pre- and post-grant); and advocating for the use of compulsory licenses, which is a government order allowing generic competition even during the pendency of a patent to introduce more affordable drugs to the market.

Governments in middle-income countries must lead efforts to make full use of TRIPS flexibilities to ensure sustainable access to affordable medicines. This will require them to work with and support civil society. Utilising TRIPS flexibilities means working together against political and legal pressure, and rejecting any TRIPS-plus measures that may impact access to medicines.

Global health and development agencies must provide technical and political support to MICs and encourage the use of TRIPS flexibilities as part of their efforts to expand access to affordable medicines. This must include specifically funding activities supporting and promoting the use of TRIPS flexibilities at national level including civil society’s work in this area.

Given the importance of tackling the HIV epidemic in middle-income countries, global agencies should consider determining funding and health interventions on a public health-oriented basis instead of relying on income-based classifications.

For more detail and the recommendations in full, read:  The Problem with Patents: Access to Affordable HIV Treatment in Middle-Income Countries.